The monthly Maker Monday event takes place at 1000 Trades in the Jewellery Quarter. We are fortunate to be able to invite great speakers from across the broad arts, creative and technology arenas to entertain and inspire.

This month we were delighted to welcome Martin O’Hanlon from the Raspberry Pi Foundation and Alan Richard’s from the Disruptive Media Learning Lab at Coventry University. 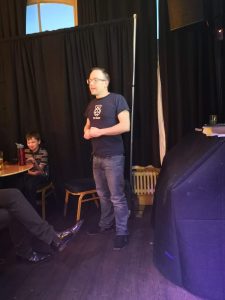 First up, we welcomed Martin, Learning Manager at the Raspberry Pi Foundation. Martin’s  entertaining and hands-on presentation took us on a personal journey how his Blue Dot app came into being.

The talk started with a rhetorical question – “how do I help other people get rid of wires and control things wirelessly.” He conceived the answer, to “create a wireless button”.

He defined a brief for the wireless button: to be as simple as a wired

From this, the Blue Dot evolved, a simple bluetooth remote to control
Raspberry Pi projects wirelessly, powered from an Android or Python app and with zero boiler plate.

Martin demonstrated how a few lines of Python Code could control a number of objects remotely. He started by using the SenseHat emulator to control the change of colour of the SenseHat using BlueDot – yellow, green red. 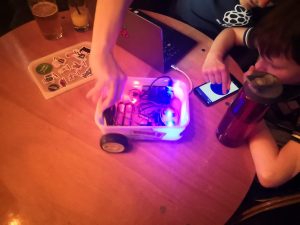 He then used the Raspberry Pi’s Build A Robot Buggy project to showcase how his own buggy could be powered remotely using the BlueDot.

What was clearly apparent was that through such simplicity, the possibilities here were many and multiple. Variables such as colour, distance, angle, velocity and object.

Martin provided many moments of maker based wisdom 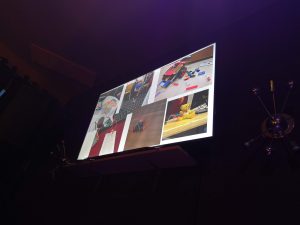 throughout his talk – “constraint can often bring us great rewards” and “having less makes us more creative”.

The BlueDot is the epitome of Martin’s wisdom and the crowd were very appreciative of his excellent live demo.

For more on the Raspberry Pi Foundation – www.raspberrypi.org 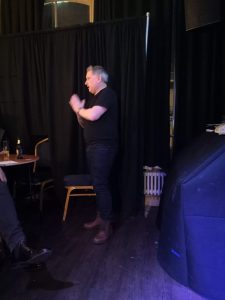 We were delighted to welcome Alan Richards back to MakerMonday for his second appearance. In his first appearance, Alan and his team from Disruptive Media introduced us to Lego Mindstorms and the methodology behind Lego Serious Play.

The title of Alan’s talk “IKEA to ISIS – Flatpack Drones for Asymmetric Warfare” was a inspirational whistestop tour of how simple innovations in drone technologies can be embraced by human to make significant change in the world.

Innovation is after all human-led. In a time where drone technologies 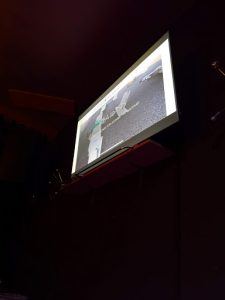 have been made so synonymous with military use or individuals causing airport disruption. Alan’s examples showed the true positive impact of drone technology.

Alan contextualised his talk by talking about what is “the new normal”, how we’re living in industry 4.0, a time of the internet of everything where “everything will talk to everything.”

We live in a world where telephone boxes have been turned into defibrillator boxes. We’re at a point now that if you collapse in Birmingham City Centre, a drone with a defibrillator could be deployed to land next to you. 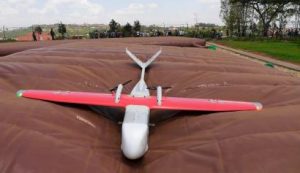 Alan talked about the work of Zipline who have been working to deliver medical drones in Rwanda and Ghana. Rwanda was the first country to open its airspace to drones.

Zipline built fixed wing drones to deliver medical supplies such as blood. In such remote areas, a haemmorage meant a 80% chance of death.  Zipline’s very simple design, consisting of cardboard parachute, V1 rocket and a drone on a bungee chord, is transforming lives across the African subcontinent.

Building on this, Alan also talked about the Everfly APSARA drone, an origami-like disposable drone 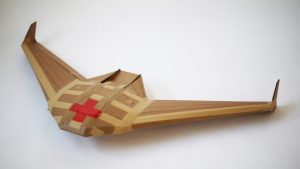 made to deliver essential supplies in a humanitarian or disaster situation. The contents can save lives. Furthermore, when the drones land, the drone will decompose but electronics can be used again to good effect.

Drones can drop flat hydration packs addressing issues around sanitation and clean water. Alan talked about “the girl effect”. Girls do not put their lives at risk in travelling miles to collect water. In a world, where 1 billion people don’t have access to clean water and two billion people don’t have to sanitation,  Innovations such as the Everfly APSARA drone highlight how human behaviour drives how innovations are used.

Drones can deliver things to places that we wouldn’t go. Alan’s examples brought us full circle back to Martin’s talk and the notion of how simple ideas can transform lives.

For more about the Disruptive Media Learning Lab: https://dmll.org.uk/ 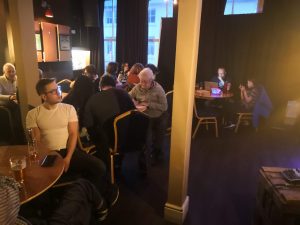 The next Maker Monday will be on Monday March 25th at 1000 Trades. You can book your place here.

How to make your online sales soar with Shopify

Why AR can make an impact on your business if used effectively!

As we prepare for the post-pandemic era – is your business ecommerce ready?

How to: The basics of writing a successful business plan