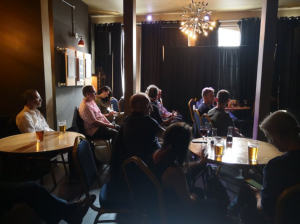 In true and playform form, Mark Brill kicked off the evening with a fun ice-breaker, inviting us to talk to each other about our favourite childhood game. This led to Mark’s very entertaining admission that as his father was a doctor, he had the fortune to play his own version of the classic game, Operation, by interspersing tools from his father’s profession into it. Imagine that!

On that note, Mark introduced our first speaker, John Sear. John has worked as a games designer for over 20 years. Opening with a whistle-stop tour of his career, John introduced his transition from console games to real-world games designer. John works in public spaces and his work designing magical experiences for cinemas, car-parks and other outdoor & indoor spaces, with a focus on the GLAM (galleries, libraries archives & museums) sector. 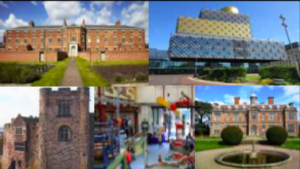 John’s freelance work has involved working with some major clients including the National Trust, the BBC and Historic Royal Palaces. He ran through some very impressive examples of his work and how John makes interactions in public spaces, as shown through a link to diymuseum.tech which contains a number of free resources for museums. 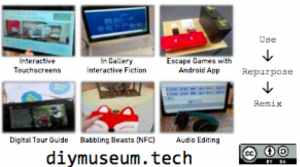 At the time of Maker Monday, John had only recently returned from spending a few days trying to escape (for gaming and for work purposes) from a (disused) prison with a few hundred other people. He was keen to stress that he gets to organise events and conferences around the world though in cities including Beijing, London, Copenhagen. 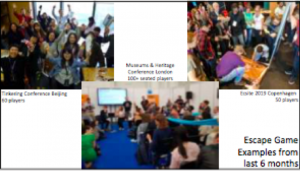 What is an escape room?

John then introduced the concept of the escape room, a phenomenon which has got really popular over the last five years. Its popularity is down to its simple concept – get locked in a room with 4-6 for an hour with the aim to escape by solving puzzles and codes. In essence, a bit like the Crystal Maze, but a tad more sophisticated. 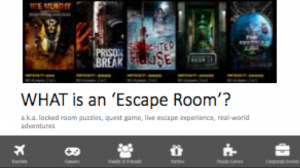 People are willing to pay a lot of money to do these escape games and it is a shared experience that brings people together, can be shared (via social media) and is a format ideal for folks where time is in limited supply.

John tracked the journey to escape rooms from his own work in Second Life programmes, the huge success of the Steam digital distribution platform through to the shared community and evolution of X-Box Live, the removal of the Walled Garden and Indiegame:The Movie.

John added the development of live experiences such as Secret Cinema or the interactive theatre of You Me Bum Bum Train to highlight how Escape Games have evolved from the wider demand for a collaborative experience involving game systems.

John talked through three of his own examples. 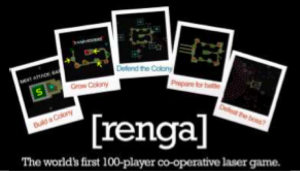 Renga (2011) was the world’s first 100 player co-operative laser game,  known as a “theatrical co-op” game and designed to be played in a movie theater with up to one hundred players, with each player holding a laser pointer. 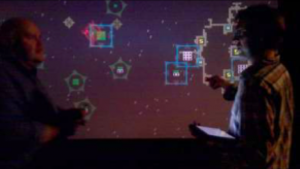 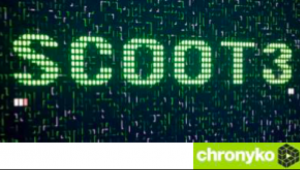 With escape games, puzzles generally have a single answer whereas games have all sorts of complexity to them. 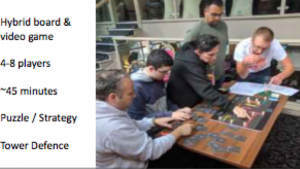 Scoot is a response to all of these, a hybrid board and video game over a set time frame involving a blend of physical and computer game elements, all done over a tabletop. Of course, John was to allow attendees to take part in their own table-top game (see below) after the event. 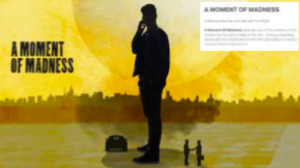 Finally, John talked about A Moment of Madness, an immersive theatre and gaming collaboration with Katie Day (The Other Way Works) and Digital Writer Tim Wright. 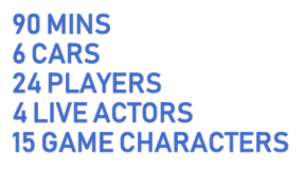 A Moment of Madness is both a structured and immersive piece of theatre which fuses drama with real-time gameplay to create a visceral new live experience. The format allows the producers and the audience to have the freedom to do things.

Game-like mechanics allow for exciting things to happen and John, Katie and Tim have taken A Moment of Madness on tour across the UK.

From the expansive world of games and puzzles to the very personal and intimate world of photography, our second speaker Jonny Briggs laid bare his fascinating work to the audience in a highly introspective and candid look at his work. 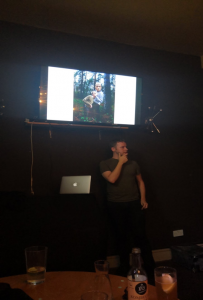 Jonny’s honest talk looked at the construct of his works, the materials used and the context behind them, leading to a very ‘self-aware’ take on his own work. His topic areas are childhood, family (his parents) and upbringing. 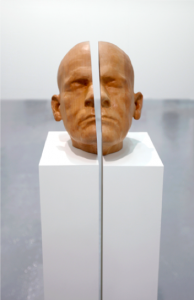 Every piece attempts to recapture elements of his own childhood through adult eyes.

One of Jonny’s key observations on his own work was how the art-making process can empower and give you a voice. His artistic voice was highly inventive, with the use of different materials, cartoon-like imagery, and sometimes the use of the ‘grotesque’ provides a sense of the distorted nature of looking back. 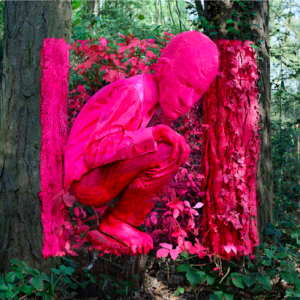 Jonny also felt very comfortable critiquing his own works, accepting them as snapshots of a particular moment not only of his childhood but actually the moment of when they are made. 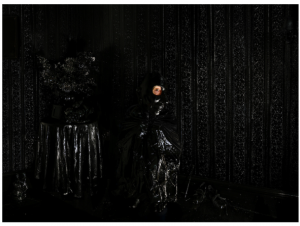 Jonny uses devices such as holes, masks or superimposed materials to change the dynamics of what could be a photo. Jonny’s works are far more than just that. They allow the audience to question the nature of photography, the message behind it, not only if it’s actually true or not but where the photographer is indeed sure of that too.

Jonny talked about a lack of trust in photography. When the Mona Lisa was stolen, more people went to the Louvre to see the empty space than when it was there.

Jonny asked, “How small can something be in order for it to be something?” 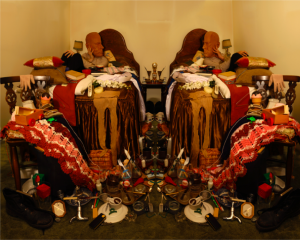 The photo above consisted of belongings which belonged to Jonny’s parents. It’s only a mirror image from the viewpoint of the camera.

Jonny is often questioning his own motifs and ideas around his own work. It’s fascinating for an artist to acknowledge confusion. 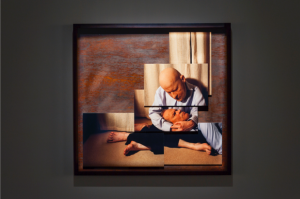 Jonny initiated a great conversation around the concept of the mask in photography and what does it actually mean to be yourself? 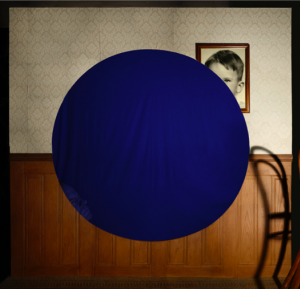 Take, for example, this photo above, with a blue hole in what is a domestic photo, in essence, a photo of his Dad with a blue screen backdrop. Jonny is accentuating the idea of what is seen, what isn’t seen, what is said and what is not said.

Jonny’s talk was unique. We seldom get someone at Maker Monday who is prepared to ponder his own work quite so honestly and we really honed into the mental and internal dilemmas of an artist and it was a joy to experience this.

Most of this month’s attendees stayed around for an after-hours bonus, as John set up and ran proceedings for one of his tabletop popup escape games Deep Secrets. It felt very Le Carre watching folks solving clues, code-breaking and listening to a spy on the move across Europe.

We should do these after-hours activities more often. What do you think? 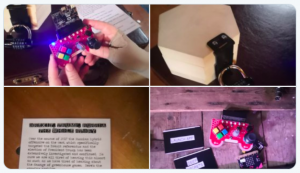 The next Maker Monday will be on Monday July 29th at 1000 Trades with special guests Michael de Groot and Karl W Newton. You can book your place at: https://makermondayjuly2019.eventbrite.com.