Birmingham City University has welcomed a colony of 8,000 Buckfast bees to its city centre campus to aid to its teaching and research as well as bringing about environmental benefits. A project supported by the creative design and building skills in STEAMhouse.

The beehive and colony of bees has been installed on the roof of the bridge link between Millennium Point and the University’s Parkside Building, and is the first of a number of beehives which will permanently reside on the roof space.

The bees will provide opportunities for students on a number of courses, from those studying filmmaking and visual communication to architecture, where students will learn about roof design incorporating beehives.

In addition to their educational value, bees have a positive ecological impact as they play a vital role in the pollination process, boosting biodiversity. The decline of bees around the world has been well documented in the press and, by keeping hives, the University can contribute to bee conservation and protect their habitat.

Film Production Technology and Filmaking lecturer, Michael Bickerton, came up with the idea and met with the founder of Bee9 Honey and member of the British Beekeepers Association, Tim Vivian, to bring the idea to life with the support of the University’s Environmental Team.

Tim Vivian, who previously established a colony of bees on top of the Custard Factory in Digbeth, designed and built the University’s beehive at STEAMhouse, before the hive was installed on a roof at the city centre campus.

“Bumblebees and solitary bees are suffering a lot because of habitat loss, people come along and decide to tarmac their lawns or that they want a perfect garden rather than having lots of nice areas bees can borrow in.

“Anyone who wants to do their bit for bees, I’d advise them to grow flowers- it’s the best thing they can do.

“There is so much regeneration going around here , there are lots of corners and places for the bees to find, even though we are in the centre of Birmingham.”, Tim commented.

Kath Turner, Environmental Officer at Birmingham City University, said: “It’s such a fantastic project and I couldn’t be happier that we’re able to bring a part of nature into the urban environment.

It’s a great opportunity for students to learn about why bees are so vital to the survival of humankind, and how they can influence positive change in the future.
Kath Turner 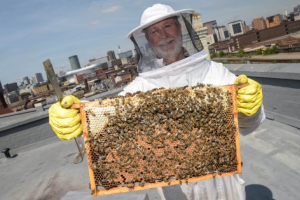 Tim Vivian added: “Hopefully the bees on the roof will allow students to get used to the idea of seeing urban bees at the University. When they graduate and move into jobs where they can influence their work environment, they may consider bees and their needs.”

The colony will also form part of his research on finding ways to reduce wind turbulence for bees entering their hive.

Michael Bickerton, who originally had the idea to bring bees to the campus, said: “After a number of years of having this vision, it’s great to see that with the hard work of many people and the tenacity of Tim and Kath Turner from the Environmental Team, it has finally become a reality.”

The environmental project has been supported and facilitated by Millenium Point, which granted landlord’s consent for the beehives.

Millennium Point Senior Facilities Manager Chris Pawsey commented: “It’s great to be involved in such an important and prestigious inner city environmental project that introduces and encourages student awareness of the world of bees and their importance within the environment, while also giving a positive buzz around the place.”

Feeling inspired? Get involved with STEAMhouse by checking out our upcoming events or by applying for your free STEAMhouse membership here.

How to make your online sales soar with Shopify

Why AR can make an impact on your business if used effectively!

As we prepare for the post-pandemic era – is your business ecommerce ready?

How to: The basics of writing a successful business plan